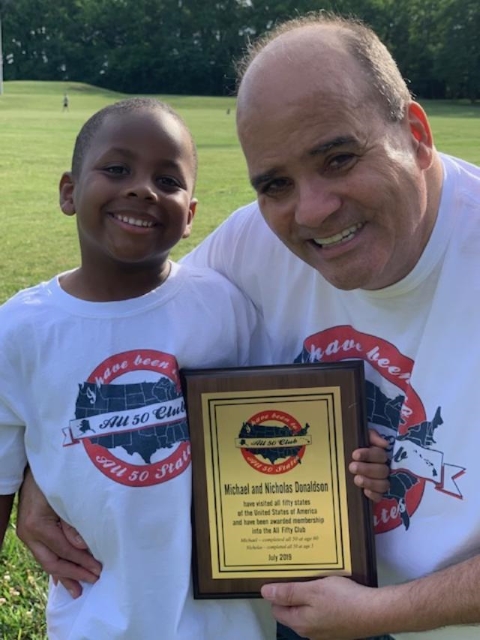 A huge congratulations to Nicholas and Michael Donaldson who completed their all 50 journey in July 2019. Young Nicholas completed before he started kindergarten so we are proud to list him as one of your youngest 50 staters on our Record Holders list. This accomplishment, though, has a much deeper meaning.  It was a quest for legacy and memories for Nicholas with his dad, Michael Donaldson. Michael (Mike) was diagnosed with stage 4 inoperable pancreatic cancer, one week before Nicholas was born.  Not sure how much time he had left, Michael sought to see all he could with his wife and son. We are so glad they were able to create these everlasting memories and very honored and humbled to be part of the celebration!

My name is Michael Donaldson, 60 years old from Fredericksburg, VA and I’m a 5 year Inoperable Stage Four (4) Pancreatic Cancer survivor.   The cover photo of my son (who also completed 50 states by age 5  years and 1 month, before Kindergarten) and me was taken on Wednesday, July 10, 2019 in North Pole, Alaska (at the pole), where it was 89 F and we were in shorts.

My son Nicholas who was born one week after my diagnosis  (now  5 years and 1 month old) and I completed  our 50 states journey in July 2019, when our family (Mike, Christy and Nick) visited Alaska, Washington State, Oregon and Canada.  My wife Christy, has visited about 46-47 states with the completion of this trip.   Although I had traveled to many of the states before Nick’s birth, I learned that I was diagnosed with this terrible disease that 75% of those diagnosed die from in one year’s time and in 2014, only had a 6%, five year survivor rate.

Most of our trips were organic and regional over a five year time frame.  We went to Hawaii in September 2014 (which was scheduled before his birth)  while I was being treated with chemotherapy.  Nick, an infant, went with us. Not knowing how much time I had to live (and I prepared for the worse), I wanted us as a family to take short trips while I could for memories.  As I continued to be graced to live with the cancer in remission (but had an 85% chance of returning) , the travels turned organically into leaving a legacy to Nicholas that we traveled together as a family, with taking photos in most of the states we visited so that he would have something to remember me by and our time together as a family in his young life.

Before our last adventure in July 2019, I had visited 49 states, with Alaska, being my final state remaining.  Nick, had visited 47 states with Washington State, Oregon and Alaska being his final three states.  Initially, our plan was to visit Washington State, Oregon and then travel to Vancouver, B.C. to take a seven day cruise to Alaska via the Inside Passage and for Nick and I to step on Alaska soil at the same time.   We subsequently changed those plans to visit Alaska first, then go to Washington State and Oregon. On July, 9, 2019, I finally was able to check off Alaska as my final state and Nick checked off Oregon as his final state on July 22, 2019.   Nick also checked off his first international country (Canada) hat he visited twice during this trip.

Finally, I give Glory to God and thankful for Christy, who is the next member of the family to go over the 50 state finish line.

The most memorable was Hawaii in September 2014, as I was being treated with chemotherapy for pancreatic cancer and had to get special permission to travel from my oncologist (others told me not to go), but our 3 month old son Nick went on his first real long distance trip (that was over 10 hours).

The second was the Pacific Northwest (including Alaska, Washington State, Oregon and Canada) in July 2019, when my son Nick and I both visited our 50th state. Nick was only 5 years, 1 month old, in Pre Kindergarten and I celebrated being a 5 year pancreatic cancer survivor. 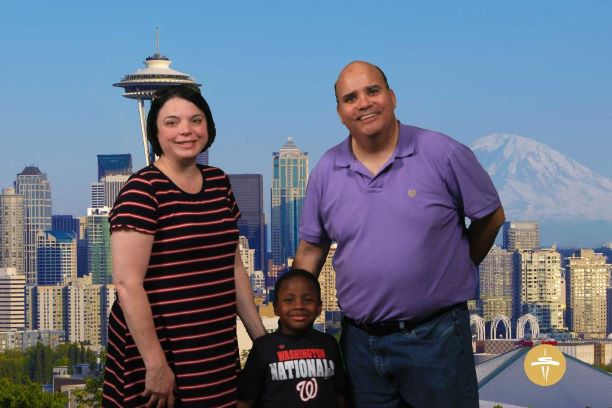