Thank you for your interest in Travel Goal Getter and the All Fifty Club!
We are very appreciative of your interest to work with us and reach our members, readers, and app users. Our travelers are focused on reaching their travel goals and we want to help them get there and help them share their stories.

We enjoy writing reviews. We'd be happy to review gear, tech, books or other travel related products. Additionally, we'd love to check out your destination. Although we aren't going to love everything, we do enjoy new and interesting things and we promise a critical and grateful review that our readers can trust.

We are seeking advertisers and sponsors.
Please contact us directly for more information but please understand there are a few things that we observe with regards to advertising:

All Fifty States Club (AKA All Fifty Club)

Like many travelers, Alicia Rovey set a goal to visit all 50 states.  She visited many states as a child, took some trips in college, traveled for work and before she knew it she had been to almost every state.  With 4 states to go she founded The All Fifty Club in 2006 wanting to connect with other travelers who were pursuing the same goal. The mission was to help other travelers track, share, and celebrate the amazing accomplishment of visiting all 50 states.

To encourage travelers to reach individual travel goals, Travel Goal Getter celebrates travel achievements through travel milestone clubs with free membership for people who have visited at least 50 states, and/or all 7 continents, and/or at least 15 countries. After filling out a short application, the travel accomplishment is put on the official register on the company website. On the website, travelers can also purchase certificates and plaques to celebrate their travel achievements. People can also connect via the travel blog, which is focused on travel goal achievements, travel milestone stories, travel tips, travel goal setting, and highlights of travel destinations.
Travel Goal Getter - Logo & Videos 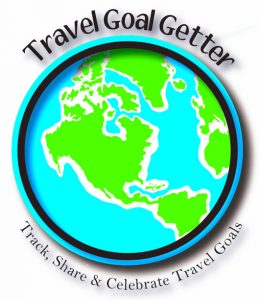 The iPad App is designed with world and US travelers in mind, giving the power to track places visited and not visited on an interactive map. Useful for even the most seasoned world travelers, over 240 countries and territories can be marked on the map. Travelers tap continents, countries, territories, and states to cycle through blue, grey, or green colors, creating a visual representation of travel achievements and travel goals. The map displays a running tally of states, countries, territories, and continents visited. Users can email their map and list of places visited and not visited and also share their map and lists with built-in Facebook posting capabilities.

For travelers who keep track of bucket lists, the App includes a feature called “myXPs,” which stands for “My Experiences.” Users can create multiple bucket lists and assign experiences or to-do items for each list. For example, a user might create a list called “China Trip 2012” and add experiences to the list, such as “Walk the Great Wall of China.” As experiences are completed, a check box can be tapped to easily indicate that it is done. Similar to the travel goal map, bucket lists can be emailed and shared via Facebook through built-in functionalities.

The Travel Goal Getter iPad App was planned with a focus on flexibility and usability. “Because the iPad is often a shared device, the App was built to allow the creation of 6 separate profiles so different members of a family can have their own travel goal map and bucket lists,” explains co-founder, Eric Prior. For households where the iPad is not a shared device, users can simply create multiple travel goal maps unique to individual travel interests. To make the App easier to use, it does not require an Internet connection, and usernames and passwords are not required. Additionally, the App is flexible in its creative uses. For example, you can use the App to play a license plate game on a road trip, keep track of completed marathons, or mark states with US Presidential Election results.

Available on the App Store.