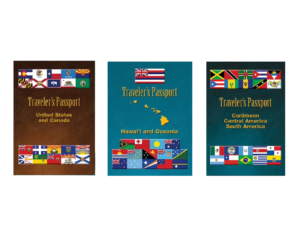 All Fifty Club members Dr. Ron and Betsy Snipe of Port Angeles, WA created Traveler's Passports for the USA and Canada, Hawaii and Oceania, and Central and South America.  They have a passion for travel, geography, and education and desire to share these passions with others. Use the handy 4" x 6" passports to keep track of your travels. The books include an outline map of the USA to color in places visited and include pictures and information about each place and a space to enter the date of each visit. 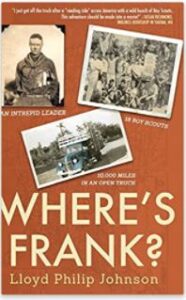 "Where's Frank" piqued enthusiasm and high interest when first circulated as a short version to a group of interested people. The true story is based on the recent finding of Scoutmaster Curtiss Gilbert's journal of an improbable Boy Scout trip of 10,000 miles in the back of a fruit truck post-WWII. It started in Yakima, Washington 70 years ago and now includes the memories of the seven surviving Scouts. What made Gilbert so unusual to take on a project impossible today with its risks and adventures--around the entire continental United States? He released young teens to explore New York City on their own. How and why would he leave boys behind, far from home, to have to catch up? What happened to them? How about the inevitable crazy antics, accidents, injuries, and truck problems? What really occurred to the boys in the truck and their leader? And how did these long-ago experiences affect those of us who live to tell the stories of our adventure--now in this protective era of risk-averse child-raising.

Take a vicarious trip with freelance golf and travel writer Chuck Miller, "The Traveling Guy", as he reflects on his 50-Week, 50-State golf odyssey during which he played 141 golf courses while driving to and through a different state each week. Enjoying learning about the courses he played, the places he stayed, and the good, bad, and ugly things that happened to him during his year on the road. An easy and entertaining read for anyone who likes the game of golf, enjoys traveling, and is interested in learning about things to see and do in cities and towns in the U.S. 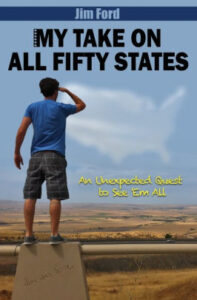 My Take on All Fifty States by member Jim Ford

Fulltime troublemaker Jim Ford didn't think much about traveling growing up. He was too busy goofing around in his neighborhood and running from the local police. Soon his thirst for adventure and discovering the new fueled him to leave the safety of his small town and set out to become an actor and a stuntman, and to see every state in the process. Things paid off quickly after moving to New York. Not only was Jim snagging lucrative commercials and parts alongside some legends of Film & Television, he was surprisingly filming in a multitude of new and exciting locations. He picked up some rare experiences along the way that include fighting with Colin Ferrell, having a shootout with Tom Cruise, and running around with Justin Timberlake. This is a daring memoir told through an array of unique escapades that all happen in different states. MY TAKE ON ALL FIFTY STATES is an unexpected journey that will entertain you, as well as inspire you to get off the couch, take risks, and try to live every day to the fullest. It's truly a wild ride, filled with humor, love, insight, unapologetic energy, and some really cool stories. 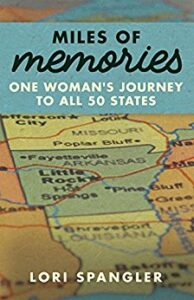 Growing up in rural Minnesota, “going on a trip” in Lori Spangler’s childhood meant traveling twenty miles to her grandparents’ house. As she grew older and ventured out of the “Land of 10,000 Lakes,” Lori discovered her love of travel. From Hawaii to Maine, Lori has crossed the border of every state. Her debut book, Miles of Memories: One Woman’s Journey to All 50 States, not only takes readers on a unique road trip, it validates that anyone can do anything they set their mind to. Following her travels from state to state in , Lori includes fun tidbits she learned on her journey to join the All Fifty States Club. Each chapter ends with “Lori’s Learning,” where she includes words of wisdom she gleaned from her travels. Having set her own personal goal and succeeded, Lori has advice for others looking to add traveling to all 50 states to their bucket list: do it! Lori encourages readers to have fun and enjoy everything they experience—flat tires and smelly fish included.