Northernmost Places in the U.S.A.

The northernmost point in the United States is Utqiagvik, also known as Point Barrow.  The town went back to its original Inupiaq name of Utqiagvik in 2016.  It is only accessible by air or sea as there is no land route to the city.  Alaskan Airlines has flights from Anchorage or you can arrange with a private tour company.  Learn about the culture and history of the Inupiaq native people, take a dip or plunge in the Arctic Ocean, see whale hunting in action.

We were in Barrow July 11-12, 2003. Since it was the summer, the weather was pretty comfortable–a bit on the cold side, but with a light jacket or sweatshirt, we were good to go. We landed at a very small airport after midnight and it was still light out since the sun doesn’t really set there in the summer. We stayed at “The Top of the World Hotel” for our whole time there. Our hotel room faced the Arctic Ocean and using my mom’s binoculars we were able to look out and see large chunks of ice floating in the water. We even saw two polar bears walking on some of the ice! The first night we had dinner in an industrial-looking building called Arctic Pizza. I’m not 100% sure if I remember this correctly, but I think a slice of pizza was more expensive than we were used to because of the cost of shipping ingredients to the area.

The next day we had breakfast at a place called Osaka’s. We got in an off-road Hummer for a tour and drove on the beach alongside the Arctic Ocean to Point Barrow and Point Plover, which is a little spit of land extending south from Point Barrow, the northernmost point. The ride was a little bumpy since we were driving on the sand, which I remember being pretty coarse and not very soft. The beach was also littered with whale bones which were HUGE. We got close enough to touch them so we got a solid understanding of just how large they were. We also came across a headless walrus carcass on the beach. We were told that hunters do this in order to take the walrus’s tusks and they leave the rest of the body. My dad and I got out of the car and walked to the ocean to touch the water so we could say we touched the Arctic Ocean. He even took his shoe off to stick his foot in it.

After traveling the oceanside, we drove more inland. Most of the landscape was grayish-brown tundra soil but there were a few areas of grasses. We got to see a snowy owl perched in one of these grassy areas. The tour ended and we had dinner at Pepe’s Restaurant which is one of the few, if not the only, Mexican restaurant in the Arctic circle. I heard a few years ago Pepe’s actually burnt down so I don’t think it is in operation any longer. After dinner, we went to the Inupiat Heritage Center and got to watch the Inupiat people of the area perform one of their cultural dances. At the end they asked if anyone in our group had a birthday coming up. My grandma, who was traveling with us, did and they brought her into the center of a special birthday dance to honor her. They were extremely gracious, kind, and welcoming.

As someone whose been to all fifty states, Barrow is the most interesting place I’ve been. The town is low-key, and there may be nothing outrageous about any buildings or manmade features, but when you understand where you are in the world it makes it all amazing. Touching the Arctic Ocean, seeing the Arctic wildlife, and even eating pizza at the top of the world is an experience you can really only get in very few places on this planet. The fact that Barrow is habitable is a testament to all the people that live there and for anyone looking for something different in their travels, I highly recommend it.

All Fifty Club notes – Sadly, Pepe’s North of the Border Mexican restaurant did burn down and was not rebuilt.  You can still stay at the Top of the World Hotel (and a few other hotels) and get a $20 pizza at Arctic pizza!

From member Jeff Kunz from Utah

My father, when I was in the tenth grade (July 1968), was "bound and determined" to make it to not just Alaska, not just to Barrow, Alaska, but, specifically, to Pt. Barrow, Alaska (the furthest north point on the North America Continent). We made it on a Wien Air Alaska flight from Fairbanks. Usually, this flight would land in Barrow. However, the Barrow airport was closed for construction. Therefore, the military landing strip at Pt. Barrow (five miles north of Barrow) was used for the landing. As we made the turn on the runway, the airplane became stuck in the dirt. A bus came out and picked us up.

Later (February 1979 as the sun had just started to rise above the horizon), as an IBM marketing representative, I covered northern Alaska for the IBM company and resided for 18 months in Fairbanks, Alaska. It was -61F. when I took a small city bus from Barrow out to remote and dark Pt. Barrow to solidify business with NOAA (National Oceanic Atmospheric Administration). This was my second trip to the "furthest north point on the North American continent."

From member Alan S.  from Washington

Notes from trip from years ago.  Flights with Alaska Airlines depart from Anchorage. If I remember correctly, the morning flight goes to Deadhorse (SCC) first, then continues on to BRW (Wiley Post-Will Rogers Memorial Airport at Point Barrow).  I forget if Kotze or Nome are on that flight route.

I think I just booked the van tour at what was either their visitor's center or their only hotel. There was actually a small group of us at the time, mostly AS employees. I was non-revving, which is why I booked the tour day of.

The tour was pretty interesting. We couldn't drive up to the point due to the snow, but we did drive as far north as possible, to a former military airstrip. You can also access the Arctic Ocean from there, although it was completely frozen when I arrived.

The town was itself was similar to other North Slope towns. It's situated on a rocky coastline. No paved roads due to it being on permafrost. The tundra grasslands are south of the town.

The Navy had a weather base up there. The old Quonset huts have been converted into town facilities. One of the buildings was repurposed as a community college.

They have a whale hunt, I forget how many times a year. They actually drag the carcass onto the decommissioned airstrip (which is a steel grating material) to break it down.

If you plan a trip there, I would fly there in the morning and catch the return flight to ANC at night. We had a full day to explore. I wouldn't recommend overnighting, since the only hotel there charges over $250/night, and the cost of food there is extremely expensive. I think a gallon of milk was priced at $8 when I went to their grocery store. Internet is provided by a company called GCI and it is also expensive and slow to use. 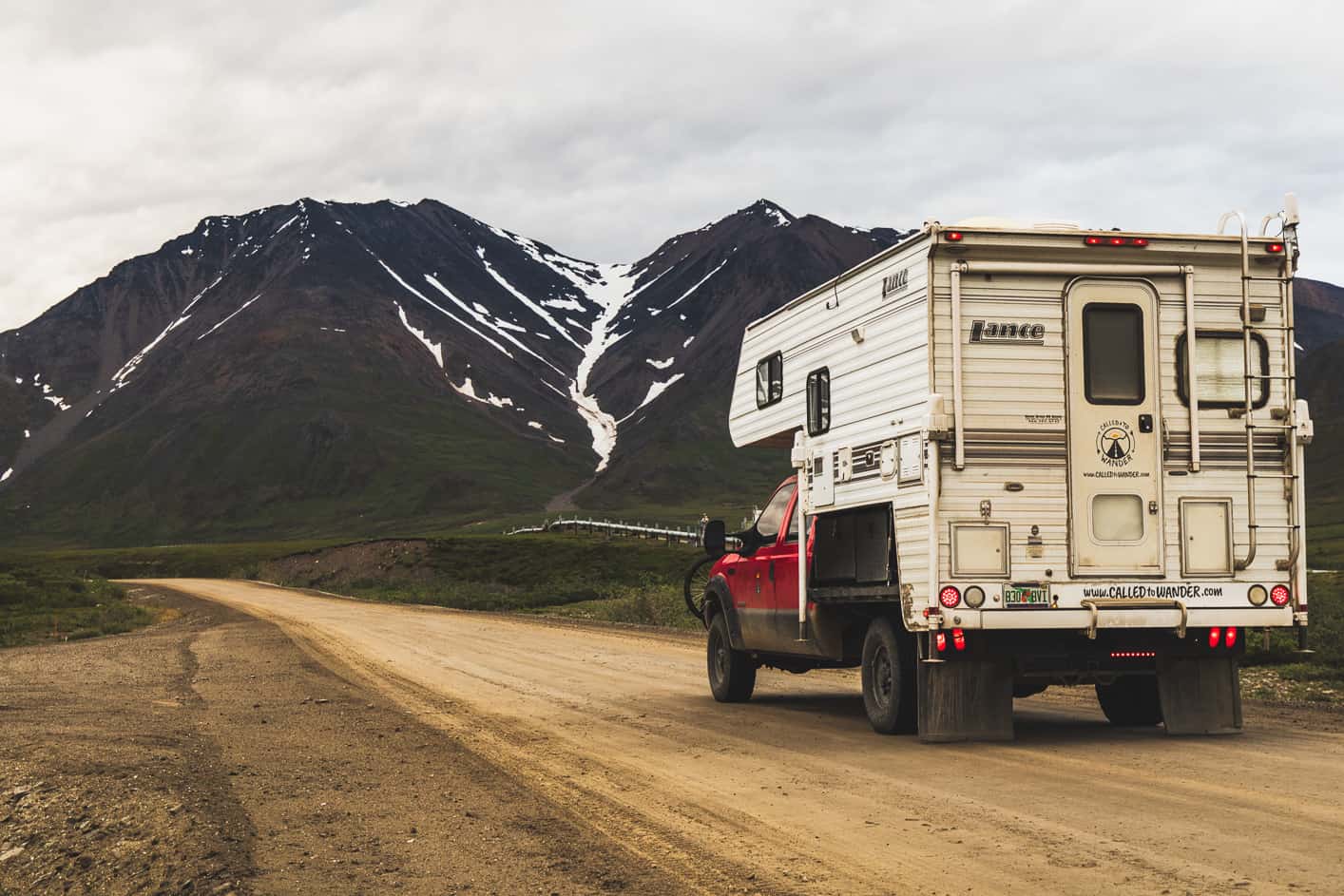 The northernmost point in the United States that you can drive to is to Deadhorse, in Prudhoe Bay.  It is 494 miles north of Fairbanks via the Dalton Highway via a mostly dirt and gravel road. The Alaska Department of Transportation warns travelers to be prepared with extra fuel, food, water, tires, first aid, and other emergency supplies.  This journey takes you into the Arctic Circle, through Coldfoot, ending at the Arctic Ocean.

The blog Called to Wander includes a detailed video of Chris and Lindsay making this journey. 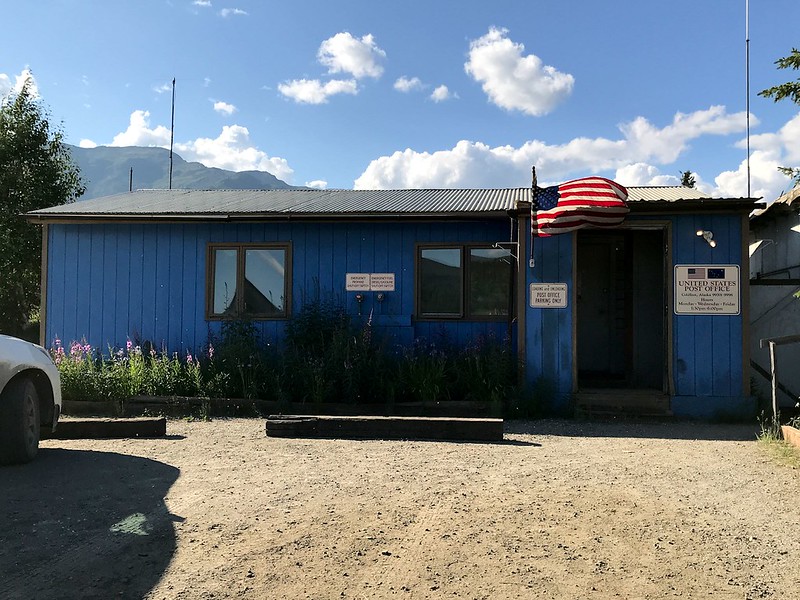 Coldfoot claims the northernmost bar in Alaska and is the farthest-north truck stop in the USA.  According to travelalaska.com, Coldfoot got its name in 1900, when gold seekers made it that far, then got "cold feet" and turned around!  A trip to Coldfoot takes you across the Arctic Circle as the highway and views of the Trans-Alaskan pipeline and the Yukon River bridge.  Coldfootcamp.com claims that Coldfoot is located directly under the Aurora Oval, so every single night that the weather is clear (about 80% of the time), the aurora is visible from camp.  The Arctic Interagency Visitor Center has exhibits, nature trails, and knowledgeable staff. 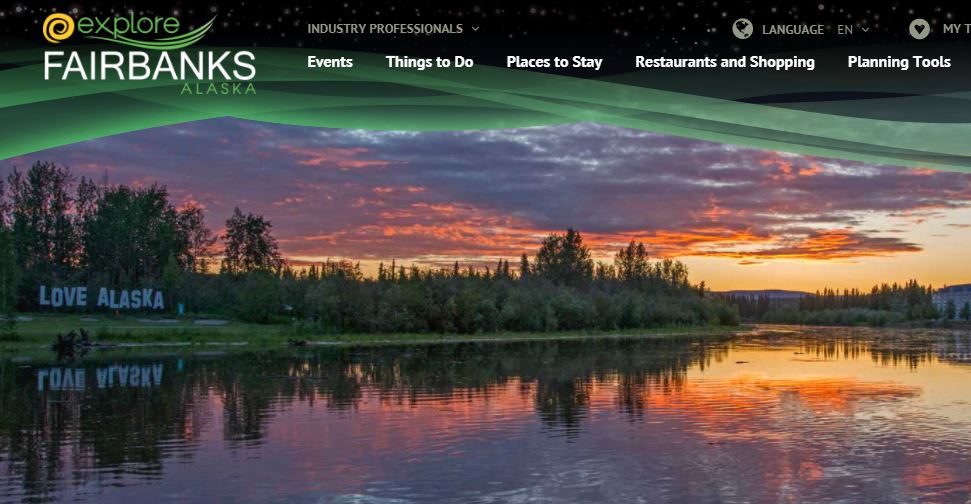 Fairbanks is the northernmost large city with a population of around 31,500 people.  The city 'North Pole' is actually south of Fairbanks for those looking to say they have been to "the North Pole".   Just north of Fairbanks, in Fox, Alaska is the restaurant and brewery, Silver Gulch which is the northernmost brewery in America. Fairbanks itself has a multitude of things to do - nature, museums, tours, sports, history, etc.   Visit fairbanks.com to find out how many hours of daylight to expect on any given travel date.  As in other northern parts of  Alaska,  it is the Land of the Midnight Sun - summer dates are 24 hours of daylight! 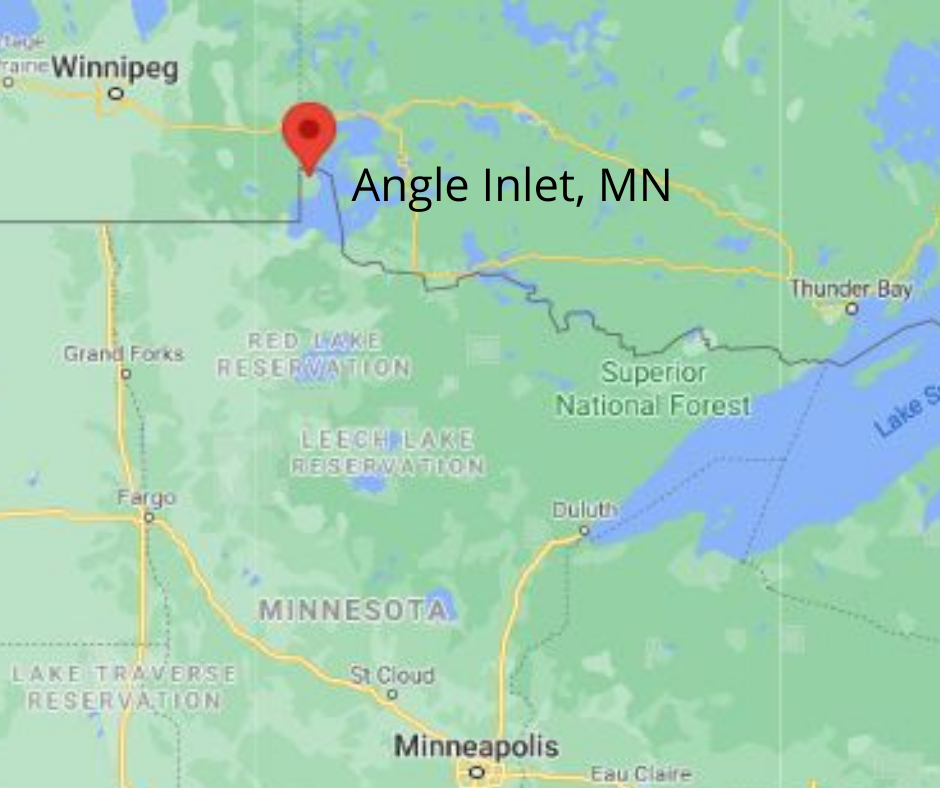 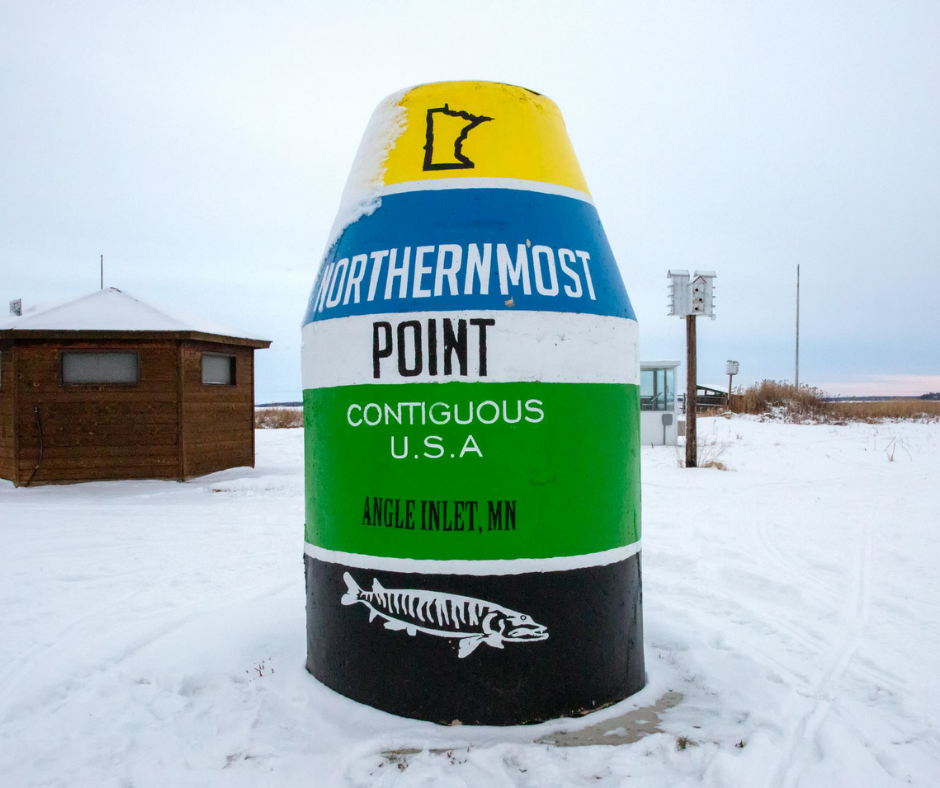 Angle Inlet, Minnesota is the northernmost place in the United States in the 48 contiguous states.  Due to mapping, surveying, and border negotiations years ago, this small sliver of land is part of the United States but is only accessible by driving through Manitoba, Canada or by water crossing Lake of the Woods from Minnesota.  Tips - you need a passport!

"Northernmost Point Buoy in the Contiguous US, Angle Inlet in the Northwest Angle, Minnesota" by Lorie Shaull is licensed under CC BY-SA 2.0 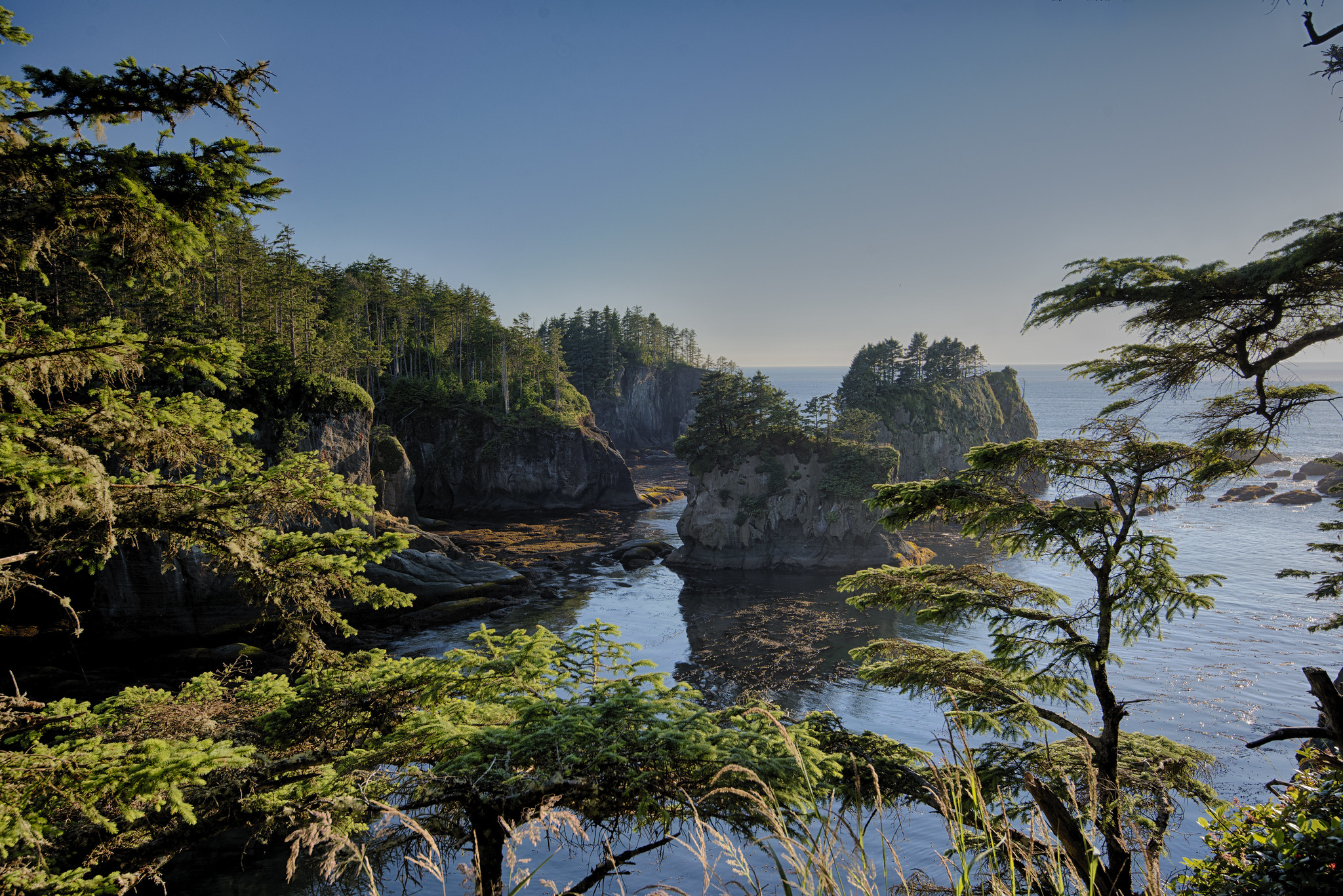 By looking at most US maps, one would think Maine is the most northern state in the United States after Alaska.  But maps are deceiving, that is unless you are looking at a longitude/latitude map.  Maine is not the most northern at all, Washington, Idaho, Montana, North Dakota, and Minnesota all extend farther north.  Cape Flattery, WA claims the northwest tip and is accessible only through arrangements with the Makah Tribe.  Other northern honorable mentions - Sumas, Washington border town and Glacier National Park, Montana.

"Cape Flattery" by snowpeak is licensed under CC BY 2.0